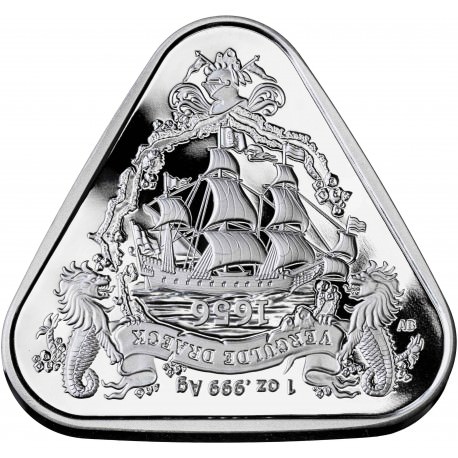 These coins are the second of the Australian Shipwreck Series, following the Batavia release of 2019. On the morning of 28 April 1656, a VOC ship called the Vergulde Draeck, travelling towards Batavia (now Jakarta) with a load of trade goods, coins, cargo, passengers and crew, struck an uncharted reef off the coast of Western Australia. The reef gutted the ship and only 75 of the crew survived, along with a small quantity of provisions and a single boat.

The under steersman, Abraham Leeman, took the boat and six crew on an astonishing and gruelling journey to Batavia and reported the wreck. Several attempts were made to rescue the survivors, but they were never located. The wreck of the Vergulde Draeck was discovered in 1963 and was excavated in 1972. Some 19,000 coins were recovered, mainly Spanish reals and some Japanese silver coins. The mystery of what became of the survivors of the Vergulde Draeck has never been answered. This was one of the most enigmatic episodes of Australia’s maritime history.