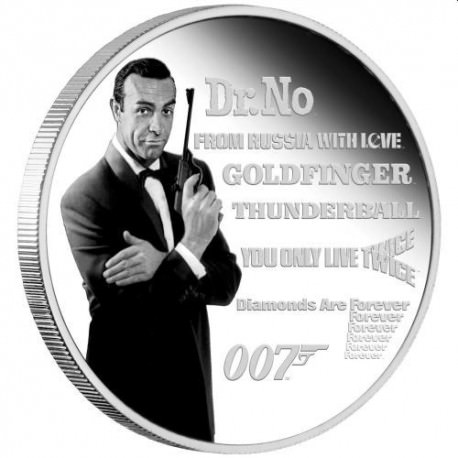 The Perth Mint pays tribute to the late Sir Sean Connery with this special silver proof coin for fans of James Bond and collectors of official movie memorabilia.

Sean Connery was the first actor to play fictional British Secret Service agent James Bond on the big screen. Chosen for the role by producers Cubby Broccoli and Harry Saltzman, who acquired the rights to Ian Fleming’s Bond novels in 1961, his powerful portrayal in Dr. No immediately established the charismatic operative also known as 007 as one of cinema’s most recognisable characters. For many fans he remains the quintessential Bond.

The coin’s reverse portrays a black and white image of the much-loved actor in a classic Bond pose. The design includes the franchise’s iconic 007 gun amid inscriptions of Connery’s triumphant Bond movies released between 1962 and 1971 - Dr. No, Goldfinger, From Russia With Love, Thunderball, You Only Live Twice and Diamonds Are Forever.

Accompanied by a numbered Certificate of Authenticity, each coin in the limited mintage is presented in a 007 branded case and themed shipper.