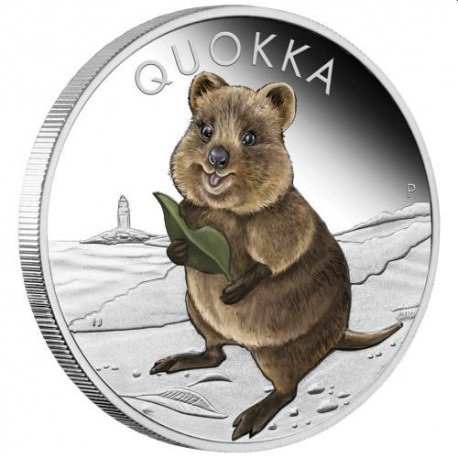 Struck from 1oz of pure silver in proof format, this charming coloured coin is sure to raise a smile with collectors familiar with Western Australia’s famous quokka.

A quokka is a small type of wallaby found mainly in the south west region of Western Australia, particularly Rottnest Island, an idyllic location 18 kilometres off the Perth coast. Thanks to its cute, smiley appearance, the quokka is known as the ‘world’s happiest animal’. Willing to interact with human beings, it has become a hugely popular subject for ‘selfies’ among thousands of annual visitors to the holiday hotspot.

The coin portrays a quokka in colour on a beach with a lighthouse in the background. Standing on its hind legs, the herbivorous marsupial is eating its preferred diet of leaves. Included on the reverse is The Perth Mint’s ‘P’ mintmark.

Accompanied by a numbered Certificate of Authenticity, the coin is housed in a classic display case with a clear lid. The case comes in an illustrated shipper portraying a pristine Rottnest Island beach.