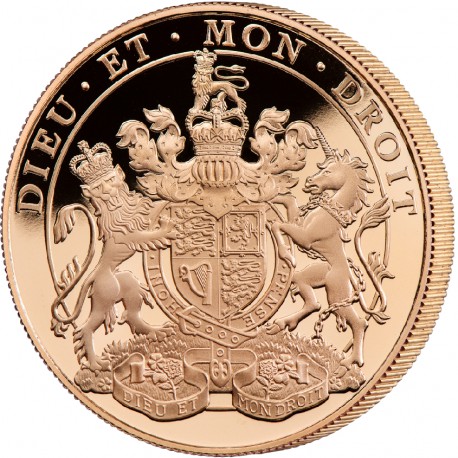 Honouring the Platinum Jubilee of Her Majesty Queen Elizabeth II

STRICTLY LIMITED TO ONLY 50 COINS WORLDWIDE

In 2022 Her Majesty Queen Elizabeth II will become the first British monarch to mark 70 years on the throne. In honour of her Platinum Jubilee, our 2022 Sovereign Collection features the heraldic symbols that form Her Majesty’s official coat of arms.

The magnificent 2022 Five Sovereign Gold Proof Coin displays the full royal coat of arms, capturing all the fantastic beasts and symbols that appear across the Collection. The arms form Her Majesty’s official flag, the Royal Standard, which can be seen flying on buildings that represent the Crown. The British Government is officially known as ‘Her Majesty’s Government’, so the arms also features on state documents, such as British passports.

In tribute to Her Majesty’s Platinum Jubilee, we have combined traditional hand craftsmanship with the best of modern minting technology to ensure that every design detail of this strictly limited edition gold coin is emphasised by our finest proof quality finish. Each coin is presented in a bespoke display case alongside a numbered certificate which guarantees its specification and authenticity.