DUE TO VERY ACTIVE TRADING , SHIPMENTS CAN BE DELAYED . THANK YOU FOR YOUR PATIENCE. The GOLDSILVER.BE team wishes you a very Merry End of the Year. 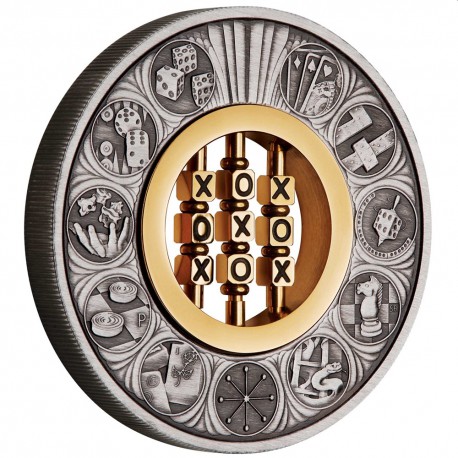 PRE-SALE PRODUCT - Your entire order will only ship when all coins are in stock. NOVEMBER 6

Games were played by ancient civilisations as competitive recreation and represent one of humanity’s oldest forms of social interaction. Despite modern electronic alternatives, many continue to provide entertaining group activities strongly associated with joyous times, including Christmas and summer vacations.

The coin portrays game-related motifs within a ring of circles. Clockwise from the top, they symbolise playing cards, dominoes, a spinning dice, chess, snakes and ladders, terni lapilli, mahjong, draughts (or checkers), knucklebones, backgammon, and dice. Also included on the reverse is a background pattern and The Perth Mint’s ‘P’ mintmark.