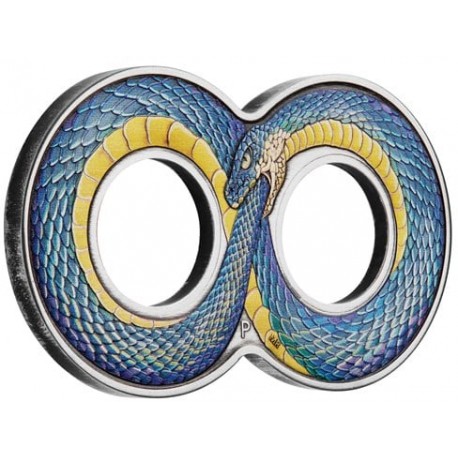 In Chinese culture, the dragon is revered as a divine creature and potent symbol of power, strength, wealth and fortune. The phoenix is an immortal bird whose rare appearance is believed to foreshadow harmony and peace. In feng shui, these mythical creatures are considered perfect matches for one another, representing ‘yin’ and ‘yang’ respectively in the Chinese philosophical account of natural balance and interdependence. The coin is shaped like the figure eight in honour of the number’s cultural significance in China as the luckiest number.

Shaped like a figure eight, the coin’s reverse features an exceptionally detailed depiction of a dragon and phoenix surrounded by stylised clouds. The Perth Mint’s traditional ‘P’ mintmark also appears in the design.

This coin has been individually ‘antiqued’ to give it a unique finish conveying the surface abrasions of an ancient artefact. As a result of this treatment, the appearance of each coin may vary.

Accompanied by a numbered Certificate of Authenticity, each coin is presented in a clear acrylic case and is packaged within a beautifully coloured shipper.