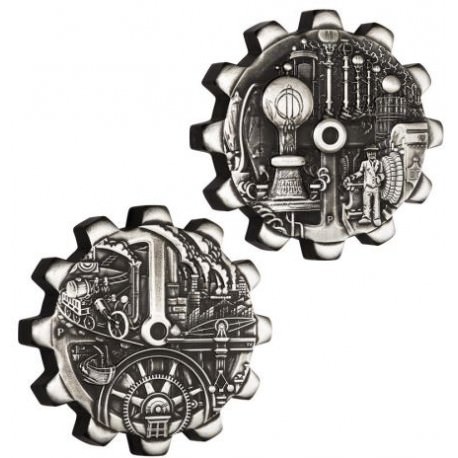 Driven by the adoption of new technologies and processes from the late 18th century, the Industrial Revolution had dramatic effects on economics, politics and culture, shaping the world in which we now live. To do its far-reaching consequences sufficient justice, the design approach to this remarkable tribute set is similarly revolutionary!

Each coin in the set is struck from 1oz of 99.99% pure silver. The surfaces of the coins have been ‘antiqued’, a special treatment intended to give them the appearance of historical artefacts.

Imagery on the ‘steam’ coin portrays an early steam locomotive; chimneys of mills which used steam power for driving large-scale machinery; and a pioneering steamship. Incorporated in the design is a large flywheel and other components symbolising elements of Boulton and Watt’s ground-breaking steam engine.

The ‘electricity’ coin includes a representation of Thomas Edison’s incandescent lightbulb and the inventor himself at Pearl Street Station. It also incorporates a representation of spectacular electrical discharges from a Tesla coil, a system invented in 1891 that produced extremely high voltages used by Tesla in experiments aimed at achieving wireless transmission of energy.

Issued as legal tender under the authority of the Government of Tuvalu, both coins depict the Ian Rank-Broadley effigy of Her Majesty Queen Elizabeth II the obverse.

The Perth Mint will release no more than 1,000 of these extraordinary Two-Coin Sets, each accompanied by a numbered Certificate of Authenticity.

The coins are presented in a unique case with a circular rack-and-pinion style tray which allows them to be rotated in a highly innovative, active display.

9 other products in the same category: