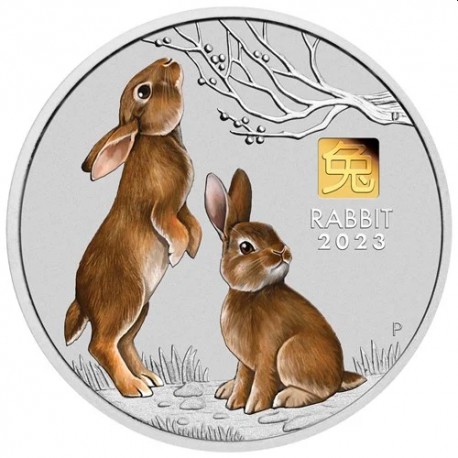 Literally, an enormous example of minting excellence, this truly spectacular coloured coin is struck from 1 kilo of 99.99% pure silver with a special pure gold privy mark.

The coin portrays an alert rabbit with its ears erect and another rabbit stretching towards a budding branch. Also included in the design is a 1-gram pure gold privy insert portraying the Chinese character for ‘rabbit’, the inscription ‘RABBIT 2023’ and The Perth Mint’s ‘P’ mintmark.

Accompanied by a numbered certificate of authenticity, the coin comes in a classic display case with a clear lid, and an illustrated shipper. When aligned with shippers from other coins in Series III, the resulting diorama depicts all 12 animals participating in The Great Race, a traditional Chinese story about the creation of the lunar calendar.