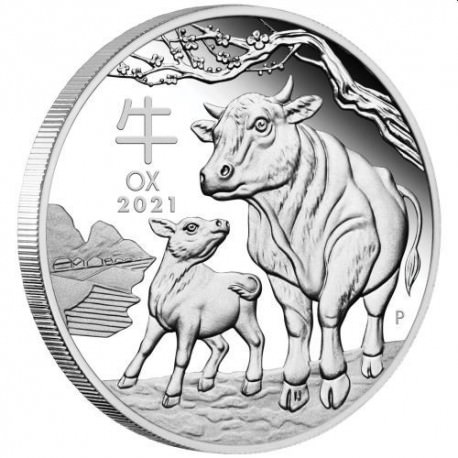 Meticulously crafted from pure silver in flawless proof quality, these coins from the Australian Lunar Series are perfect acquisitions and gifts for anyone born under the Chinese lunar sign of the ox.

First issued in 1995 and now in its third round, the long-running Australian Lunar Coin Series celebrates the animals of the Chinese zodiac with a sequence of annual designs portraying the mouse, ox, tiger, rabbit, dragon, snake, horse, goat, monkey, rooster, dog and pig. These 2021 coins celebrate the Year of the Ox, whose rule over every second year in the 12-year lunar cycle is said to influence people born during 1949, 1961, 1973, 1985, 1997, 2009 and 2021.

Each coin’s reverse portrays a charming image of an ox and its calf with a cherry blossom tree, a symbol of love and beauty. The design includes the inscription OX 2021, the Chinese character for ‘ox’ and The Perth Mint’s ‘P’ mintmark.

Accompanied by a numbered Certificate of Authenticity, each release comes in a classic display case with a clear lid and an illustrated shipper. When aligned with the previous Year of the Mouse shipper and future shippers from the series, the illustration forms a diorama depicting all 12 animals in the order the finished The Great Race, a traditional Chinese story about the creation of the lunar calendar.