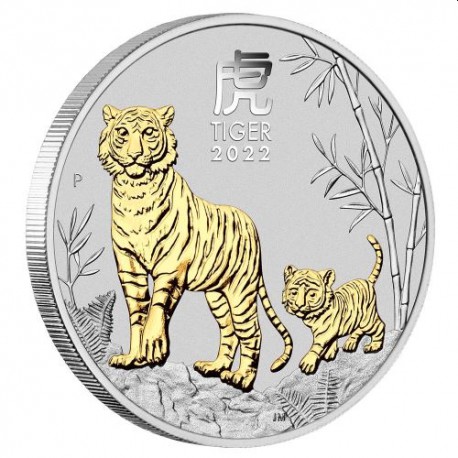 Meticulously crafted from 1oz of pure silver, this 2022 Year of the Tiger coin is beautifully enhanced with selective 24-carat gilding.

The coin portrays a tiger cub following its proud and protective parent across a rocky terrain. Both animals are gilded in 24-carat gold. Also included in the design are representations of bamboo and ferns, the Chinese character for ‘tiger’, the inscription ‘TIGER 2022’ and The Perth Mint’s ‘P’ mintmark.

The coin is housed in a classic display case with a clear lid decorated with a silver geometric design. The case is packaged in a beautifully illustrated shipper portraying the story of how the tiger became the third animal of the Chinese lunar calendar and is accompanied by a numbered certificate of authenticity.

The shippers of the coins in the Australian Lunar Series III will, when arrayed together, form a diorama depicting the ancient myth of The Great Race.

6 other products in the same category: