GOLDSILVER.BE IS CLOSED FROM 9 TILL 18 JULY. 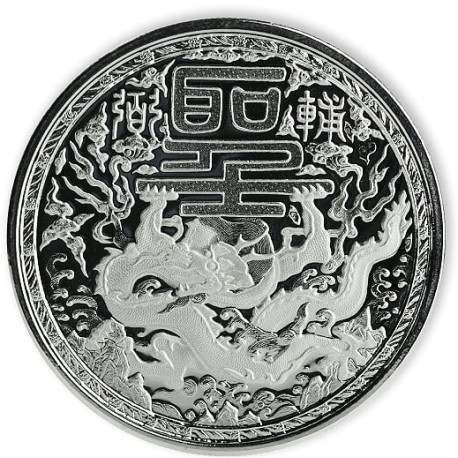 The coin's image emulates a fine detailed production of the official Jiajing Emperor workshops of the Chinese Ming Dynasty.

The Dragon in the center holds the Chinese character sheng, which means "divine" or "imperial majesty."  The characters above it (fu on the right and bi on the left) generally signify "to add" or "to support."  In this case they refer to the dragon, a well-known symbol of imperial authority.

The Imperial Dragon Silver Coin's complete mintage is limited to only 25,000 pieces.

The coins, manufactured and distributed by Scottsdale Mint and legal tender in Cameroon, are struck in .999+ silver, weighing 1 troy ounce each, proof-like and placed in capsules.  They are shipped on customized Scottsdale Mint branded skin boards of five (5) coins.