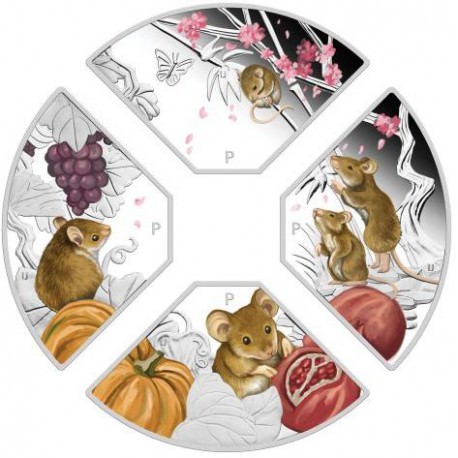 This remarkable four-coin set aligns to portray a single design celebrating the Year of the Mouse. Featuring:

The Quadrant Mouse set consists of four coins each accounting for one quarter of a circle. When arranged together the coins form a shape reminiscent of the first currency of the Chinese empire. These ‘ban liang’ coins were first cast during the Qin Dynasty around 200BCE.

The top coin’s reverse portrays a mouse climbing a branch with a plum tree bearing flowers in the background. Also included is a butterfly and falling petals.

The reverse of the coin to the right depicts two mice at the foot of the branch among grass, pebbles and half a pomegranate. One mouse is in the midst of climbing the branch.

The reverse of the coin to the left features a mouse in front of a vine which bears a hanging bunch of grapes. Pumpkin leaves and vines are also incorporated with half a pumpkin visible in the foreground.

The bottom coin’s reverse portrays a mouse nestled among pumpkins and greenery eating pomegranate seeds from an exposed fruit.

The four-coin set is presented in a classic display case with a clear magnetic lid. The case is packaged in a beautifully illustrated shipper and accompanied by a numbered Certificate of Authenticity.