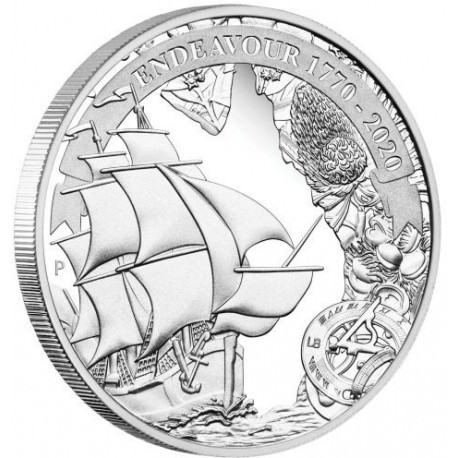 This 1oz silver coin is a fitting tribute to the historic Endeavour voyage captained by James Cook who charted the east coast of Australia in 1770. Featuring:

This silver commemorative marks 250 years since the British research vessel Endeavour reached Australia during its exploration of the Pacific Ocean, leading to scientific discoveries relating to navigation, mapping and botany.

The coin’s reverse design features a representation of HM Bark Endeavour against an outline of the east coast of Australia. Depicted in the background are various native Australian flora including Banksia, named after Joseph Banks who first recorded the species, and wattle. Also included in the design is a representation of a sun dial, the inscription ‘ENDEAVOUR 1770-2020’ and The Perth Mint’s ‘P’ mintmark.

Accompanied by a numbered Certificate of Authenticity, each coin is presented in a classic black display case and packaged within a themed shipper.