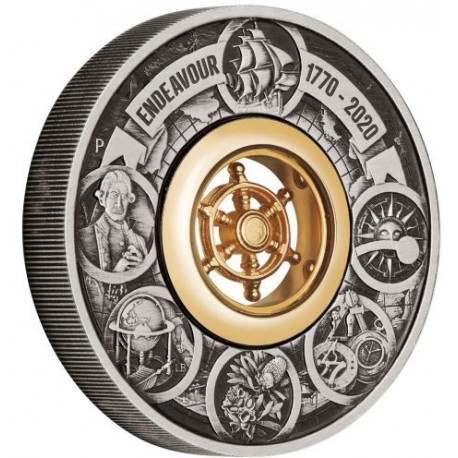 Marking 250 years since Captain James Cook and the crew of the Endeavour sighted the east coast of Australia in 1770, this innovative 2oz silver collectable celebrates the scientific achievements made possible by the historic voyage. Featuring:

British Royal Navy’s research vessel Endeavour, captained by explorer and navigator James Cook, was tasked with exploring the Pacific Ocean in 1768 and reached the east coast of Australia in 1770. This historic journey led to scientific developments in the measurement of longitude and hydrographic surveying as well as the record of new species of plants by botanist Joseph Banks. Featuring a replica ship’s wheel insert, this 2oz silver antiqued coin celebrates the profound impact Endeavour’s achievements had on navigation, mapping and natural sciences.

The coin’s reverse design features representations of the scientific breakthroughs and discoveries made during Endeavour’s journey. Arranged around a central insert of a rotating ship’s wheel, these include the ship, a sun dial charting the path of Venus, navigational tools, Banksia flowers named after Joseph Banks, mapping equipment and James Cook. Also included in the design is a background depicting continents mapped during the voyage, the inscription ‘ENDEAVOUR 1770-2020’ and The Perth Mint’s ‘P’ mintmark.

Accompanied by a numbered Certificate of Authenticity, each coin is presented in a classic black display case and packaged within a themed shipper.